I’m not the biggest American football fan (except… go Jets!). But I love Super Bowl parties. Because of the time difference, it’s a lot harder to justify hosting a party for a game that starts at 11pm (British time) on a Sunday. And it’s even worse when it’s hosted on the West Coast. Woe is me, I know.

Don’t worry about me, though. It is not going to stop me from feasting, especially since Super Bowl food is so good.

Im going to admit to enjoying some of the finer “junk” foods in life, including saucy wings and 7 layer dips. I’m also going to admit that I don’t have a deep fat fryer, and something about dumping that much oil into anything feels … expensive. 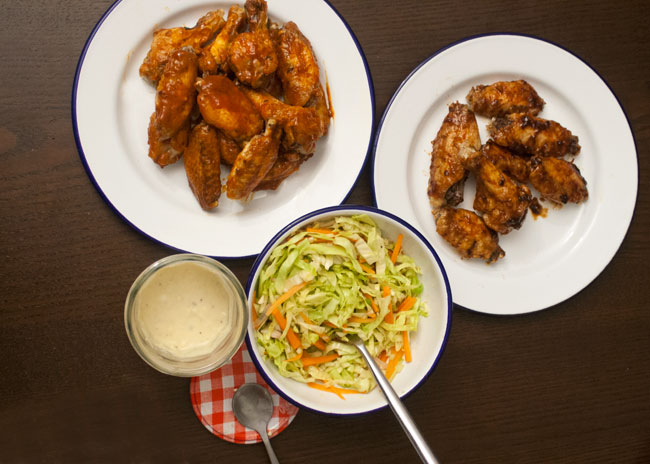 So here’s a recipe for those of you who want wings but don’t want a vat of sizzling oil hanging around. Or for anyone who wants to feel a little more saintly by telling everyone these are baked chicken wings, rather than fried.

I learned the tip that makes this recipe from one of my favorite food celebs, Alton Brown. It’s clever, it’s easy and it works. Steam your wing pieces to render out the fat, making for crispy oven-baked skin. Don’t worry, you won’t dry them out, because the steaming helps with that, too.

It’s worth noting that the steamed wings must sit in the fridge for at least an hour to cool off and dry. 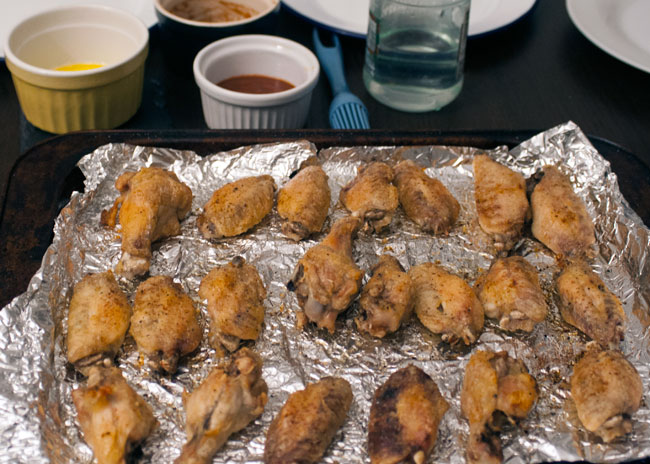 Crispy baked chicken wings will be yours before you know it.

Since I find it hard to make a decision, I make 2 different sauces to keep it interesting. You can go any direction you want. Sweet sticky barbecue, lip-tingling spice, deep and smoky…

Well … on to the recipe.

If you want a veggie-friendly Super Bowl snack, why not try vegetarian nachos instead?