It’s nearly summer, and in the UK that means that one out of every 4 weekends will be BBQ-friendly, if we’re lucky.

But if you’re in or near London and you want smoky goodness without having to cower under an umbrella, you should get to the Duke’s Head in Highgate for Prairie Fire BBQ’s June residency.

I got to sneak a peek behind the scenes into the cramped quarters of the Duke’s Head kitchen, where every month, guest chefs take over and share their skills. 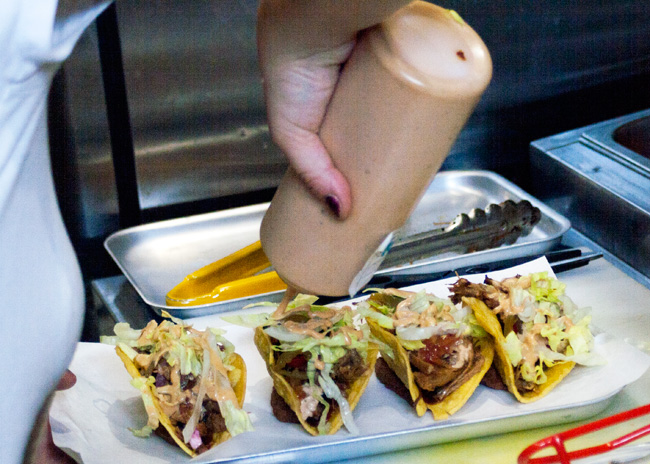 Prairie Fire is the brain child of American Michael Gratz, who saw a gap in the market for Kansas City style slow cooked meat. In the Duke’s Head kitchen, you’ll find his collaborators, Londoners Louis Lillywhite and Yasemin Ozekimci managing the meat, the veggie burgers, and all the fixins. Look to Laura’s homemade brownies, if you have any room left when you’re finished.

Speaking of, here’s what you’d find on the menu if (no … when) you make your way over.

Pulled pork tacos in freshly-fried shells, crunchy and absolutely loaded with toppings like chipotle sour cream, spring onions and punchy chiles. Don’t forget to try the refried bean ‘glue’ underneath, especially if you have any shell shards left over. 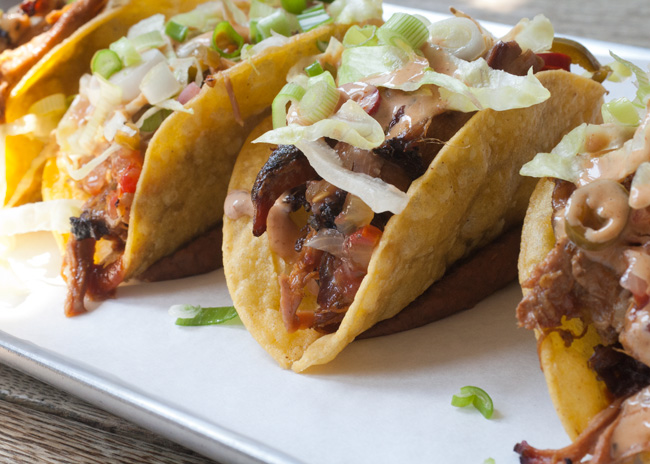 The mac & cheese is made with beautiful big curly tubes, al dente and covered in a silky, creamy unctious cheese sauce. I decided not to pry for the secret recipe, but this is a down and dirty cheese sauce, not some overwrought stilton and leek gastropub version. 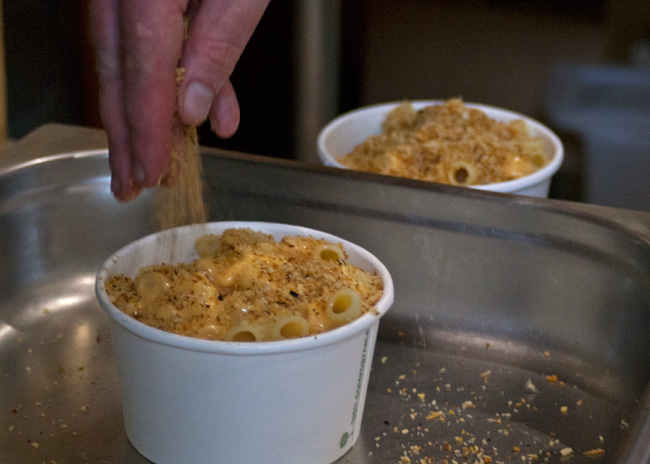 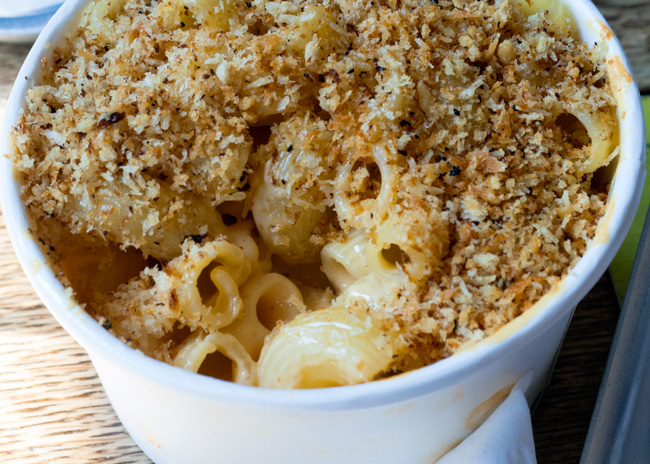 That PFQ burger. A brief moment of doubt crept in when I cut it in half and the patties weren’t as pink as I tend to have them. After taking a bite, I realized I was very wrong. Louis’s blend of chuck and rib tip beef was juicy, meaty … very messy and absolutely packed with flavor. All of that in a toasted bun with gooey melty cheese. 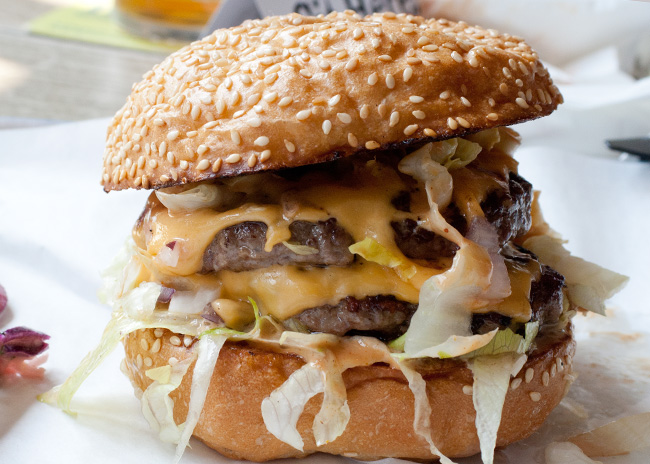 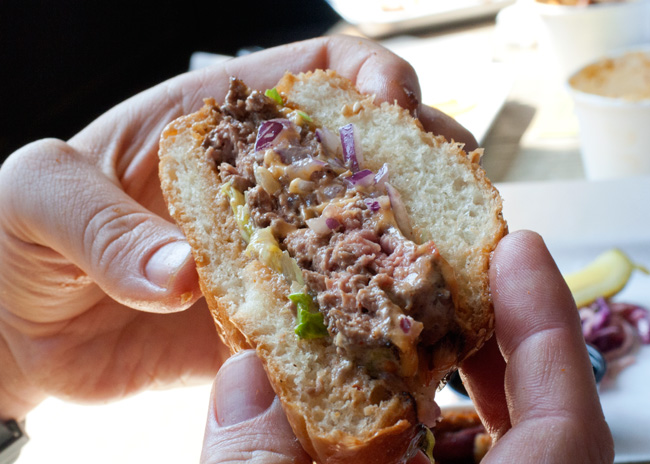 Fall-apart in your fingers 16-hour smoked brisket in a delicious floury but not dry or dense bun. Seriously, why is it so hard to find a good bun? These guys have gotten it absolutely right. 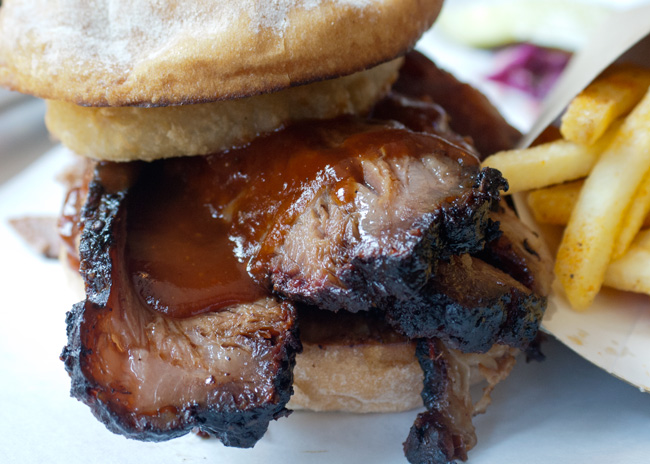 The brisket completely surrenders to a plastic knife. Useful, because I was sharing it. Compared to some recent City-based brisket that will remain unnamed, this was soft and tender, lightly seasoned and obviously given the low and slow treatment. And get a look at that Prairie Fire BBQ sauce… 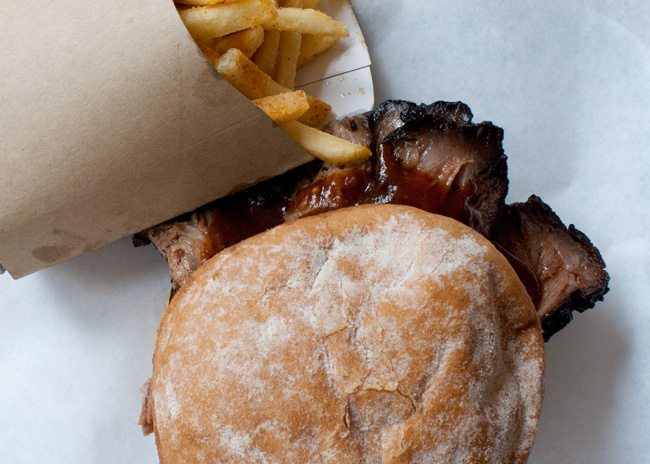 While it’s easy to ignore the fries as just another side dish, I can’t go without mentioning them. Crispy and crunchy, not even slightly oily, and generously dusted with spice that reminds me just a little bit of Old Bay (for the East Coasters). I barely had space for them but couldn’t stop picking at my portion, and maybe everyone else’s portions, too. 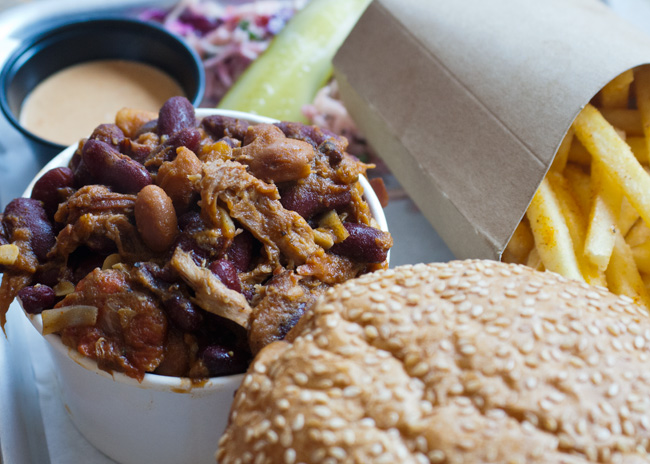 Like I said, there is also a veggie burger, but I can’t say that I’ve tried it. If you do, I’d be curious to know if you recommend it.

If you’re a beer drinker, I recommend spending a few indecisive minutes at the bar with the many great rotating options. There’s also a gin bar with Highgate-distilled Sacred and a temptation-filled cocktail menu.

While Prairie Fire don’t have anything else official in the calendar yet, keep an eye on the Prairie Fire BBQ Twitter for food market updates… and maybe even another residency soon.

Prairie Fire BBQ is at the Duke’s Head for the rest of June, every day of the week, and the kitchen is open from 12pm to 10pm.

Keep your eyes peeled for them at Brisket Fest, where I’ve been promised you can try something from Prairie Fire that no one in the UK has done before.